The Secrets of Star Wars is a fan podcast all about everything to do with Star Wars, including all of the movies, TV shows, streaming series, books, comic books, fan culture and more. The show looks at both the new creations as they are released as well as the existing library of Star Wars, going beyond the surface to look at the deeper layers and themes, while never forgetting how cool lightsabers are. Join your host Fr. Andrew “Father Fett” Kinstetter as well as Mike Creavey, Andrew Hermiz, Thomas Sanjurjo, and Angela Sealana for a weekly celebration of all things Star Wars. 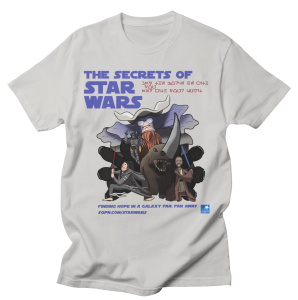 Get the official Secrets of Star Wars shirt. Boldly proclaim your Catholic Star Wars geekiness: “Finding Hope In A Galaxy Far, Far Away!” Find it at sqpn.com/merch. Tales of the Jedi: Count Dooku - Who is this Jedi turned Sith? Andrew Hermiz and Josh Beeghley look at the Tales of the Jedi series look at Count Dooku, which explores how a Jedi master could turn from the Light side and throw in with Darth Sidious. Andor, Ep. 11: Daughter of Ferrix - Is Andor too dark to be Star Wars? Angela Sealana, Patrick Mason & Ryan Nafziger explore the moral and spiritual side of episode 11, with laughs for good measure. Andor, Ep. 10: One Way Out - ONE WAY OUT! Mike Creavey, Josh Beeghley, Robert King, and Fr. Geoff Horton unpack the action-packed, edge-of-your-seat episode 10 of Andor. Are some sacrifices off limits or is anything worth sacrificing in the name of the Rebellion?
See ALL EPISODES