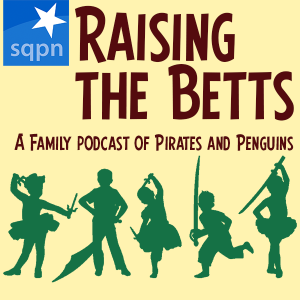 A family podcast by StarQuest’s CEO, Dom Bettinelli, and his wife, Melanie Bettinelli, who are raising five kids in the Boston area. They discuss marriage, homeschooling, Catholic faith, their adventures far and wide, cooking exotic dishes, exploring nature, engaging culture and more. Join them as they travel to zoos, museums, and historical sites; get their kids to try strange, new foods; read books and watch TV and movies together; and try to raise their kids into healthy, well-adjusted, and capable Catholic adults. Apple Season - Is apple-picking season the best season? Dom and Melanie make the case, talk about their favorite orchard, then discuss some new recipes, including apple cider donut cake and ranch fried pork chops. Plus, they talk about what picking up your cross means for kids. Blue Skies - The best New England season is beginning and the Betts are ready for it, including starting with homeschooling, getting out in the great weather, cooking all the great produce. Plus they discuss a dark episode of Marvel's What If? and a wonderful African children's book. Transitions - From summer to fall, it's a time of transition and Dom and Melanie are experiencing some of them. From long-delayed Scouting promotions to their beloved pastor getting a new assignment to schooling starting up again, a lot is changing. Exploring Cape Cod Canal - While the oldest kids are off at summer camp, Dom and Melanie lear nwhat it's like to have only two kids again; go camping themselves; make grilled Korean short ribs; read books about burgers and about rebels and Redcoats; and discuss radical trust in God. Summer Camp - It's a new phase for Dom and Melanie as their oldest kids go to sleep-away summer camp for the first time; they sneak in an anniversary celebration among the packing; watch Marvel's What If?; and get an amazing Marian homily for the Assumption.
See ALL EPISODES